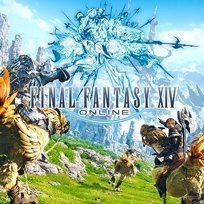 Join millions others from around the world and start your own FINAL FANTASY adventure today! Explore vast, new lands, including Ala Mhigo, and challenge new Primal threats across Eorzea as you embark on hundreds of new quests as the Warrior of Light!

- An epic FINAL FANTASY story featuring a vibrant cast of characters, hundreds of quests, and exciting locales to explore
- Celebrate the history of FINAL FANTASY through familiar monsters, bosses, music, and characters
- Tackle challenging dungeons and raids, or battle fellow players in unique forms of PvP
- Experience all of the jobs/classes on a single character using the flexible Armoury System
- Make your mark on the world by purchasing and decorating your very own estate – even build your own Airship!
Notes:
- Final Fantasy XIV Online Time Card (EU) is only valid with European Square Enix Accounts. Please double check the region of your Square Enix Account before purchasing.