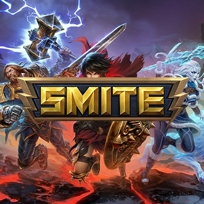 5.0 /5
Buy Now
Beware of phishing sites! We're not associated with any sites that offers exchanges for physical items, digital goods or virtual currency. More info.
Brand
SMITE
This product is currently unavailable in your region. Sorry for any inconvenience caused.
Product
SMITE Gems
We are currently out of stock. Sorry for any inconvenience caused.
Voucher
Select Option
Top Up Info
Quantity
Subtotal
US $ 0

SMITE is an online battleground between gods. SMITE is similar to a traditional Dota gameplay with a few changes including 3D graphics, third person perspective, movement with the WASD keys like an MMO, and aimed skill-shots for more action. Players choose from a selection of gods, join session based 5 versus 5 combat, and use custom powers and team tactics against other players and minions.

SMITE Gems are the in-game currency that is used for micro-transactions. SMITE Gems are used to instantly unlock new playable gods as well as cosmetic skins. Top up SMITE Gems to enhance your gaming experience now!


How to redeem SMITE Gems?

1. Log into the game or download and install SMITE if you haven't already.
2. Once in game, click "STORE", then click "REDEEM".
3. Enter your code in the field to activate the unlock.
Note:
- This product is applicable for SMITE PC version only.